Being Mediocre: Unwarranted Advice on how to Deal With It.

Being mediocre kinda sucks. It kinda sucks. Being mediocre is a feeling that is such a cup of barely under room temperature water that it lacks the cajones to really suck. And that ironically, can really, really suck. We normally don’t care if we’re mediocre at something. For instance: why is being mediocre at cooking bad? I managed to not poison anybody today. Awesome. According to whatever the law about regression to the mean is called, the average human is exactly that: average.

But man, it sucks to be mediocre sometimes. In a lot of ways, it’s worse than being bad at something. Bad is something that has a feeling to it, an emotion to it. Something to grasp. Mediocre is a forgettable bowl of mush.

Being Mediocre at What we Love.

Like I said, most of the time being a mediocre sack of flesh and hair doesn’t bother me. I strive to be an average joe most of the time. Who wants to stand out? Blegh. But when it comes to hobbies, you know, the things we actually care about: Man it’s a gut punch to be the median. You might have read (probably not) that I enjoy playing basketball. In fact, playing ball was one of the few things that kept me sane while I was working and studying in Asia. But the fact of the matter is that I am the most unspectacular player you’ll ever see. In fact, I blend into the game half the time like a ghost. (Not according to my girlfriend of course, who is convinced I could play in the NBA. Love you, sweetie.)

I wasn’t always a slice of milk toast with water though. I used to royally suck at basketball. And when I say I sucked, I mean so hilariously bad, friends would avoid me as a teammate. I was also the level of suckitude that I didn’t realize just how bad I was. I tried to join the basketball team in middle school and failed. (I forgot my doctor’s release, but I assure you I would’ve been cut before I crossed the halfcourt mark.)

I may have played basketball for the better part of 15 years, but up until my senior year of high school, I never learned to shoot. Let me rephrase: I never took the time to learn how to shoot. And that’s when my journey to middling began.

Journey to the Center of the Bell Curve

Going into college, I was still determined to play basketball in college. (No I didn’t think I could play for the National Champion D2 Bellarmine Knights. Even I wasn’t that naive. #SwordsUpBU ⚔️ ) But I thought, “Hey, maybe I could play club ball?” So every morning, I was getting up at 6:00 a.m. to do drills, lift weights, and then more drills. (My arms felt like lead weights.) Then I would do classes, work, study, and go back to the gym at 6:00 p.m. to play at any open courts until 10:00 before heading home to start all over.

Yes, I showered you nosy bastard.

And in the first few months, I was doing that, I saw tremendous gains. I wasn’t blowing the court away by any means, but people were willing to pass me the ball. Heck, there were times when I was actively helping the team win. That freshman year, I improved by such leaps and bounds that I was able to go back home and beat some of the people who would laugh openly when I guarded them.

Author’s Note: Please remember I said only some. This isn’t some Disney movie where the guy from back to the future comes down from heaven and I’m suddenly Jason Williams.

This, of course, was an example of the 80/20 rule where 80% of the benefit comes from 20% of the effort. The biggest strides come from the first few steps. (Side note, my team in the University Rec League came in the last place that season.)

While I’d certainly climbed from the depths of the sewers, I still had a long way to go. The tryouts for the basketball club went better than I could have honestly hoped. I made it past the first round of cuts but was never seriously considered.

Regardless, my love for the game continued my journey.

Sophomore year was more of the same playing, practicing, and not lifting anymore. I basically gave up on lifting weights due to a combination of my own self-doubt, and a very depressed-feeling state of mind after dealing with the death of my uncle and grandfather in the past year. *See note at the end.

I played more and more and more basketball, but I noticed that I wasn’t really improving anymore. At least, not in the leaps and the bounds that I used to. I discovered that improving wasn’t exponential, but rather it was logarithmic. (God damn it John Napier, the originator of geometric and arithmetic sequencing.)

Going Home While in Hong Kong

Yes, I’m talking about Hong Kong again. It was kind of a big deal in my growth as a person. Anyways, My Junior year I went to Hong Kong at Lingnan University. It was a great time and a transformative experience, yadda, yadda, yadda. What matters besides my #humblebrag was that I was suddenly good at basketball. See? We’ve moved on to #notatallhumblebragbutjustabragbrag.

Suddenly, I was a hell of a good ballplayer on the court. I was faster, had better instincts, and found more open shots on the court. I wasn’t just one of the better players on the court in Hong Kong. I was one of the best. Now, there were, of course, times where guys would show up in their school jerseys and just absolutely reck my shit like Vikings pillaging the British Isles. But by and large, when I was playing ball, my teammates looked to me.

It was fucking intoxicating. I felt like I was the baddest mother fucker on the court when I was there. I felt galvanized to really show what I was capable of doing on the court. I was calling plays, attacking with ferocity, talking trash (in broken Cantonese that my teammates told me to say) the whole shebang. I thought that the good times would never end. And then they ended spectacularly.

When I said my (then) goodbyes to Hong Kong and returned to America, I decided to go play some ball with the new freshman. And holy fuck I was brought back to earth. Some 6’8″ looking freshman looking mother fucker proceeded to posterize me like he was Shaq and I was Chris Dudley. I didn’t throw the ball at him, but he sure threw his balls in my face with that dunk. 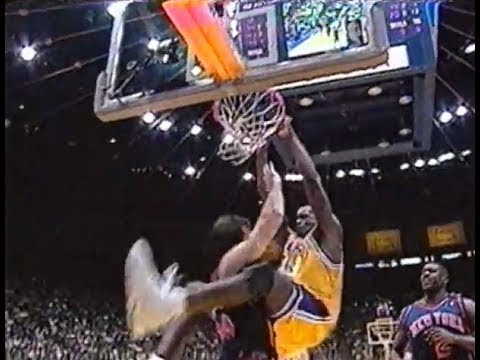 Imagine my face being about a foot lower and you get the idea.

I was reminded that there would be some things that I would never be able to change. I’m not gonna grow 8 inches and be 6’8″. Mostly because I’m actually 5’10”. What can I say? I’m a guy and lie about my height. But, also because that’s just fucking life. There are some barriers that have a glass ceiling that’s so fucking thick, it stretches for miles into the sky.

I’d keep going into my journey of basketball in college, but you both get the idea and are most likely tired of that particular story. So I’ll skip ahead to nowadays. Since then I’ve got a job, quit, got another job, quit that one, moved to Hong Kong, quit the job in Hong Kong, moved back to America, and am currently working again. That whole time my basketball playing has fluctuated, but two things have not. My skills, and my love for the game. It’s true that I’m not really getting any better at it, but I’m also not getting any worse. Barring finding the shoes of His Airness Michael Jordan, or tearing my ACL, PCL, MCL, and XCL, I’ve pretty much leveled off.

But I’ll never stop trying to get better.

What I’ve learned is that effort doesn’t always beat natural talent. But it sure helps. The only way I got better, was by putting in lots of effort. And the only way I’ll keep getting better is by putting in the effort. Results are the result of the amount of talent you have multiplied by the amount of effort you are giving. So you could have 100 whole talent, but only give 10% of your effort. That means when someone who has 20 talent shows up and gives it 100%, hell maybe even 150%, that super talented person is gonna get super embarrassed. Because effort is a skill too.

Some people just can’t give that much effort into something. It’s not that they don’t love the thing they’re doing, don’t have that sense of urgency, etc. They haven’t learned about what effort takes. To be able to really put in a good effort, you need to know desperation. You gotta know what getting punched in the mouth feels like. You gotta be able to keep a level head while your vision is going dizzy and all you taste is that bitter, metallic blood pooling in your mouth. Some people are naturals at giving effort. Others aren’t.

Those kids who did well in school but burned out in college?

That girl who could run like a gazelle high on meth being chased by a coked-up cheetah?

Yeah, she lost her scholarship because she didn’t train seriously and didn’t care about her diet.

Effort takes practice. Effort takes mental strength. ‘Effort’ is that secret super juice that helps you look up at that glass ceiling and claw through it. It’s up to you to decide when your hands get so bloody, so fucking cut up they look like ground beef, and so sore that you give up. But here’s the thing about clawing your way through a glass ceiling: When you stop clawing, you won’t fall all the way down. It’s so jagged, so shaped around your body that you’re stuck there. Stuck for the whole world to see.

A god damn monument of how effort is what makes mediocre amazing.

*(I was never and have never been diagnosed with depression and in no way am suggesting that I was clinically depressed. However, if you or someone you know is feeling suicidal thoughts please call the National Suicide Prevention Lifeline at 1-800-273-8255.)

I'm just some dude that likes writing mediocre stuff about life. View all posts by Tanner